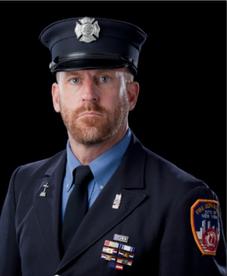 Representing the National September 11th Memorial & Museum at NATO"s 70th Anniversary telling the story of the heroes of 9/11 to 29 countries who's military sacrificed over 2500 on our behalf.

Retired New York City firefighter Tim Brown wants his first tattoo to be in honor of the 343 fellow firefighters and all the other first responders who lost their lives at the World Trade Center on 9/11.

"Truth in History, Patience in Grief."